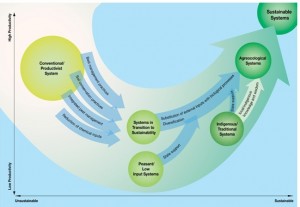 Modern industrial agricultural methods can no longer feed the world.

Governments must shift subsidies and research funding from agro-industrial monoculture to small farmers using ‘agro-ecological’ methods, according to the UN’s Special Rapporteur on the Right to Food. And as Nafeez Ahmed notes, her call coincides with a new agro-ecology initiative within the UN’s Food and Agriculture Organisation.

Modern industrial agricultural methods can no longer feed the world, due to the impacts of overlapping environmental and ecological crises linked to land, water and resource availability.

The stark warning comes from the new United Nations Special Rapporteur on the Right to Food, Prof Hilal Elver, in her first public speech since being appointed in June this year.

“Food policies which do not address the root causes of world hunger would be bound to fail”, she told a packed audience in Amsterdam.

One billion people globally are hungry, she declared, before calling on governments to support a transition to “agricultural democracy” which would empower rural small farmers.

“The 2009 global food crisis signalled the need for a turning point in the global food system”, she said at the event hosted by the Transnational Institute (TNI), a leading international think tank.

Modern agriculture, which began in the 1950s, is more resource intensive, very fossil fuel dependent, using fertilisers and toxic pesticides based on massive production and mono-culture. This policy has to change.

“We are already facing a range of challenges. Resource scarcity, increasing population, decreasing land availability and accessibility, emerging water scarcity, and soil degradation require us to re-think how best to use our resources for future generations.”

“Agro-ecology is a traditional way of using farming methods that are less resource oriented, and which work in harmony with society and nature. 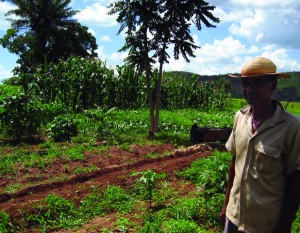 Small farmers are the key to feeding the world

“There is a geographical and distributional imbalance in who is consuming and producing. Global agricultural policy needs to adjust. In the crowded and hot world of tomorrow, the challenge of how to protect the vulnerable is heightened”, Hilal Elver continued.

Traditional farming methods entails recognising women’s role in food production It also means recognising small farmers, who are also the most vulnerable, and the most hungry.

Elver speaks not just with the authority of her UN role, but as a respected academic. She is research professor and co-director at the Project on Global Climate Change, Human Security, and Democracy in the Orfalea Center for Global and International Studies, University of California, Santa Barbara.

Hinting at the future direction of her research and policy recommendations, she criticised the vast subsidies going to large mono-culture agribusiness companies. Currently, in the European Union about 80% of subsidies and 90% of research funding go to support conventional industrial agriculture.

“If these trends continue, by 2050, 75% of the entire human population will live in urban areas. We must reverse these trends by providing new possibilities and incentives to small farmers, especially for young people in rural areas.”

But Marcel Beukeboom, a Dutch civil servant specialising in food and nutrition at the Ministry of Trade & Development who spoke after Elver, dissented from Elver’s emphasis on small farms:

“While I agree that we must do more to empower small farmers, the fact is that the big mono-culture farms are simply not going to disappear. We have to therefore find ways to make the practices of industrial agribusiness more effective, and this means working in partnership with the private sector, small and large.”

A UN initiative on agro-ecology?

The new UN food rapporteur’s debut speech coincided with a landmark two-day International Symposium on Agroecology for Food and Nutrition Security in Rome, hosted by the FAO. Over 50 experts participated in the symposium, including scientists, the private sector, government officials, and civil society leaders.

A letter to the FAO signed by nearly 70 international food scientists congratulated the UN agency for convening the agro-ecology symposium and called for a “UN system-wide initiative on agro-ecology as the central strategy for addressing climate change and building resilience in the face of water crises.”

More than just a science — a social movement!

A signatory to the letter, Mindi Schneider, assistant professor of Agrarian, Food and Environmental Studies at the Institute of Social Studies (ISS) in The Hague, said: “Agro-ecology is more than just a science, it’s also a social movement for justice that recognises and respects the right of communities of farmers to decide what they grow and how they grow it.”

“Generally, nobody talks about agro-ecology, because it’s too political. The simple fact that the FAO is calling a major international gathering to discuss agro-ecology is therefore a very significant milestone.”