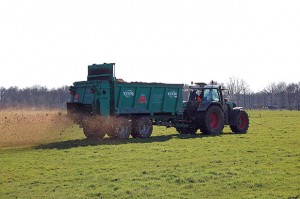 Ghulam Mustafa and Ghullam Abbas Shah wanted to investigate the effectiveness of different methods of manure production. Both from Pakistan, they received scholarships for postgraduate work at a ‘reputable foreign university’. They chose to work with Egbert Lantinga of the Department of the Ecology of Farming Systems at Wageningen University on a project that traced the key characteristics of different types of manure: from the stable floor through to the absorption of nitrogen by plants.

Recent research shows the effectiveness of different types of manure

These two researchers have now received their PhDs in agricultural science. Their findings are not only scientifically interesting, but also of practical relevance to farmers all around the world: from Pakistan to the Netherlands. Their tests, with young steers, were carried out in the sloping-floor barn of the Research and Training Farm, Droevendaal in Wageningen. The animals were fed well and gained approximately 1.3 kg per day. Each day 1 kg of chopped straw for each 100 kg of livestock weight was spread in the stable. In some tests clay (zeolite or lava meal or topsoil) was also added. The animals trampled the manure, mixing it and it slowly ran down the slope. The manure at the bottom of the slope was collected everyday and then treated in different ways. One part was composted, another part was stacked outside in a heap exposed to the elements, another part was stacked under a roof and the last part was fermented, using the same treatment applied to maize silage. These differently treated manures were then used in fertilisation experiments on grassland and maize on sandy soils at Droevendaal Farm. Tests were carried out on the manure as soon as it had been spread to see if adding lava meal and irrigating (by sprinkler) would reduce ammonia emissions. Emissions of carbon dioxide, ammonia, methane and nitrous oxide were measured. This paper focuses on the practical aspects of the results.

Losses in the stable

When just straw was spread, 16% of N in the excreted manure was lost before being processed. By adding topsoil, lava meal or clay these losses were reduced to 6%. Ammonia volatilisation was lower than expected and the majority of nitrogen was lost as inert N2-gas.

Thirty five per cent of N in the manure stacked in a heap was lost when the compost was solely straw based. When topsoil was added this fell to 20%. In other tests the manure was composted or fermented. During composting 33-45% of N was lost, but only 6-10% during fermentation. For the composted manure, 20-60% of organic matter was lost depending on the season and the duration of the composting process, but for the fermented manure just 10 to 20% was lost.  More mineral N, organic N and lignin remained after fermentation, although the figures for these last two were lower in the fermented dry matter than after composting. The combination of adding topsoil and fermentation was not researched. 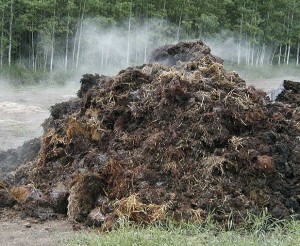 During the test on maize fields the manure was ploughed in. During the tests on grassland it became clear that volatilisation can be reduced by sprinkler-irrigation: equivalent of 5 mm and 10 mm of rain led to a reduction of 65 and 92% respectively. Addition of lava meal (or topsoil) showed a reduction of less than 50%. Adding lava meal and 10 mm of water led to emissions being close to zero.

Utilisation of nitrogen remaining in the soil

The fertilisation experiment for maize was conducted on a fertile sandy soil. In the past this soil had been fertilised with 170 kg N/ha and manure was ploughed in immediately after spreading. Shortly after flowering the unfertilised maize yielded 11,200 kg dry matter (DM)/ha, fertilised with composted manure yielded 13,600 kg DM/ha, with fresh manure the maize yielded 14,400 kg DM/ha, after storage in a firm and not too large a heap it yielded 15,500 kg DM/ha and with fermented manure it yielded 16,400 kg DM/ha. The fermented manure gave the highest N take up rate (20% of N from excreted manure) and the composted manure the lowest (8%).

These figures cannot be generalised to all situations. Other research has shown that nitrogen utilisation in the first year of application also depends on the composition of the soil, which in turn depends on the soil’s fertilisation history. This notwithstanding, all types of solid manure added to the ‘fertility bank’ with nitrogen and carbon being stored in the soil to be gradually released in the coming years. On grassland three times more grass was produced after fermentation than after composting.

The Netherlands has more deep litter stables than sloping floor barns. But these results can be applied to the management of a deep litter stable. In deep litter stables manure ferments and less composts. The processes in the top layer of deep litter manure are similar to those in manure in a sloping floor barn, whereas at deeper levels the manure mostly ferments. Usually the manure is taken out only once during the winter. It is then placed in large heaps where a large part of the manure will continue to ferment. Our experiment shows that nitrogen losses can be reduced by scattering lava meal (a pound per cow) or topsoil (a kilo per cow). However, this is not so easy to do in a deep litter stable and lava meal is presently expensive. Losses can be further controlled by placing the manure on a thin layer of straw which will absorb moisture from the heap, by neatly finishing the sides of the heap and by covering it with plastic. To minimize volatilization of ammonia, it is best to incorporate the manure into the soil immediately after spreading.  This should be done immediately before another crop or perennial (cover) crop is sown in, otherwise the accumulated nitrogen will be lost through leaching.

If the manure is spread on top of grass-land or a grass-clover mix, it is best done in rainy weather or on a cool, windless evening, when night dew is expected. It is even better to irrigate immediately, but a large amount of water (1 mm = 10 cubic metres / ha) is required.

These findings seem to run counter to those of the study by FIBL in Switzerland*). Their conclusion was that systematic use of composted manure leads to better soil structure and higher organic matter content than when using manure which is put in a heap. This conclusion is undoubtedly correct, when one bases the amount of manure on the needs of the crop. Yet one remark has to be made at this conclusion. They gave the fields the same amounts of N, P and K. They involved the manure types of existing farms and calculated the amounts of manure needed based on the nutrient levels in the manure. So they did not take into account all the processes and losses during storage, and test plots received stable organic matter from composted manure.

Composting is not just about recycling the nitrogen

There are other reasons to favour using composted manure: it suppresses weeds, kills germs that affect plants, animals and humans, is easier to handle, and, with the Biodynamic method, the ability to administer the preparations. Moreover, some crops do not tolerate poorly digested manure.  Composted manure is an excellent fertiliser. It is worth asking whether the inherent nitrogen losses during the composting process (about 50%) can be sufficiently compensated by growing more clover for a (organic) self-reliant farm.