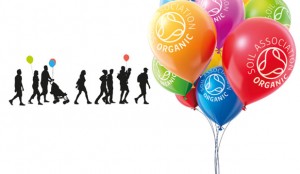 The UK’s organic market has been in sharp decline since the start of the global financial crisis. In 2008, the UK market was valued at £2.1 billion and had been growing at over 10% per year for the past decade. Since 2008, the market has fallen every single year – bucking the trend in organic markets almost everywhere else in the world. While UK organic sales have fallen by 22% since 2008, global sales have risen by 25.1%.

Why is the UK market so unusual? What lessons can be learnt? And what does the future hold? The Soil Association’s Organic Market Report 2013 provides a robust assessment of this disturbing trend, and there is much to discuss. It shows that current sales patterns are improving and the decline in the UK market is rapidly slowing. Sales in 2012 experienced a slight dip of 1.5%, that in a year that the UK re-entered recession. The UK organic market now stands at £1.64 billion – still the third largest organic market in Europe, behind Germany and France. Globally the market is dominated by the USA, which accounts for 44% of global sales. The 2013 Organic Market Report highlights some significant new trends and predicts that the UK organic market should soon bounce back.

Young shoppers are leading the way
In 2012 ethically aware consumers under 35 significantly increased their average spend on organic products. The youngest category of shoppers (under 28 years of age) spent more on organic food in 2012 than in previous years. This is a new trend that we have noticed in the last two years and its scale is growing: specific examples include the 15% growth in sales to students at Planet Organic stores.

Online and independent
The UK’s organic shoppers are increasingly choosing the convenience and variety offered by online shopping and specialist stores over the inconvenience and frustration of finding more limited ranges and stock at many supermarkets. Online and box scheme sales grew by 4.4% and independent store sales grew by nearly 1%. Dedicated organic grocery stores saw a growth of up to 10%.

The catering sector is also opening up
Belatedly, compared with the rest of Europe, and uniquely without any government support at all, the organic catering market is beginning to develop in the UK. Organic catering and restaurant sales rose by 1.6% in 2012, despite a general tendency to eat out less often in tough economic times. The Soil Association’s Food for Life Catering Mark is filling the gap left by the UK government’s procurement policies. Over 140 million meals are now part of this award scheme, which certifies caterers who use healthy, fresh, seasonal and, at silver and gold levels, organic food. This labelling scheme covers schools, hospitals, universities, nurseries, care homes and workplaces. It is putting healthy, sustainable eating at the top of the catering agenda, despite inaction from the UK government (although an honourable exception should be made for the Scottish Parliament).

The UK grocery market is unique in the extent to which it is dominated by a small number of large retailers – the ‘big four’ account for over 80% of all grocery sales. They claim that they only stock products that people want to buy, but when the first recession hit in 2008, they made sweeping reductions in organic ranges, and increased their range of economy products. Not surprisingly with less available choice, organic sales declined, leading to a self-fulfilling prophecy. Waitrose has been a notable exception and has continued to invest in organic products. Organic sales now account for 5% of their total sales and continue to grow year on year.

The lack of investment in organic ranges is most marked when looking at own label organic sales at the major retailers. Sales of organic own label products fell by 11.2% in 2012, although organic brands grew by 2.2%. This is the biggest difference we have seen and it is fair to say that the decline in retailer own label organic products is single-handedly responsible for keeping the UK organic market in a state of decline.

Sales of organic products in the EU have increased by more than 25% since the start of the global economic downturn in 2008. Our government has much to learn from its European counterparts, who have been backing the organic sector strongly through a combination of environmentally-based producer support, firm targets for public sector procurement of organic food and investment in the promotion of organic products.

In the last 10 years, the UK has fallen from 2nd in the league table of government support for organic food and farming, to 2nd from bottom. This is a pretty damning statistic. Elsewhere in Europe the situation is markedly different; for example, the Danish organic action plan target is 60% organic food in all public canteens.

Several supermarkets turned their predictions of falling demand for organic food into a self-fulfilling prophecy by dramatically cutting back on organic ranges and shelf space, reducing the availability for shoppers who wanted to carry on buying organic. This has triggered disproportionate cuts in the production of some commodities, such as eggs, causing supply challenges. It is important for retailers to work more closely than ever with their organic suppliers to ensure higher farm-gate prices, forward planning and decent forward contracts, all of which are needed to restore producer confidence and safeguard future supplies.

Despite relative neglect from policy makers and some supermarkets, there is much cause for optimism, due to the success of specialist retailers, the enthusiasm of young shoppers and the long-overdue questions being asked about our reliance on cheap, low-quality, untraceable food (especially in the wake of the horsemeat scandal). It is difficult to anticipate precisely when the UK organic market will return to growth, but we are increasingly confident that it will do so in the near future.

The Soil Association’s Organic Market Report 2013 report can be found at www.soilassociation.org/marketreport