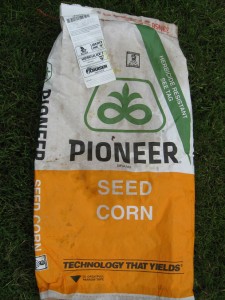 The alliance says the results of a survey of organic farmers in the U.S. shows widespread GM contamination, proving that GM “coexistence” has failed and that the resulting costs and extra work are carried by non-GM farmers. [1] This is a clear warning for Spain, the only EU country growing GM crops on a large scale and where there are likely to be more GM crops soon if approvals in the pipeline for new GM maize varieties come through.
“The situation in the U.S. should be a clear warning for Spain and the rest of the EU not to make the same mistakes,” said David Sánchez, campaign officer at Food & Water Europe. “So-called ‘coexistence’ as promoted by the GM industry is simply impossible, as farmers in both the U.S. and Spain already know.”

The survey, published first in the U.S. by Food & Water Watch and the Organic Farmers’ Agency for Relationship Marketing [2] and released today in Europe, documents the added burden organic and non-GM farmers face, including the increased costs of trying to prevent contamination, extra labour, longer hours and financial insecurity due to economic losses when contamination occurs. The survey shows a far reaching additional costs for Non-GMO farms.

“Farmers in Spain are already facing the same insecurity and lack of legal protection as U.S. colleagues, even though there is only one GM crop approved in the EU. Preventive measures and their costs should not be carried by the farmers that chose not to grow GMOs,” said Andoni García, member of the board of the Spanish Coordination of Farmers (COAG).

The Spanish organic cattle industry is also seriously affected by GM contamination. Forced to import maize from other countries that do not grow GM crops, farmers need to pay extra costs to guarantee GM-free feed. [3]

“Organic farming is a growing sector that creates employment and puts new energies in rural areas. Protecting its development means we urgently need to stop growing GM crops in Spain. We cannot be the back door for GM crops into Europe any longer,” added Blanca G. Ruibal, food and farming campaigner at Friends of the Earth Spain.

Notes
[1] The report “Organic Farmers Pay the Price for GMO Contamination“ can be downloaded here.

[2]Organic Farmers’ Agency for Relationship Marketing is a cooperative incorporated in the State of Minnesota as a marketing-agency-in-common to support organic producer and their group marketing efforts through cooperatives and farmer association. Current efforts include organic grain, livestock and dairy. Member associations/cooperatives have organic producer members in 18 states from Montana to Texas to Tennessee to Ohio and Michigan and all states in between. www.ofarm.coop

[3] Questionnaire about the socio-economic implications of the placing on the market of GMOs for cultivation. A diagnosis by Spanish organizations: COAG, Ecologistas en Acción, Friends of the Earth Spain, Greenpeace and CECU ( Socio-Economic_Report_EN-2.doc )