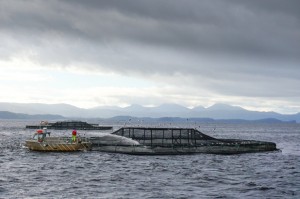 The United States government is poised to release regulations that allow fish farmed in the open ocean to be labeled “organic.” This is a bad idea. Farming fish at sea can never meet the high bar of integrity that is integral to all organic systems of production. Center for Food Safety’s new Report: Like Water and Oil: Ocean-Based Fish Farming and Organic Don’t Mix details, with scientific rigor, the four main reasons why that is so, explained below:

First, in open-ocean fish farms inputs and outputs cannot be monitored or controlled. That means that farmed fish can be exposed to toxic, synthetic substances that are present in seawater and ocean sediment, such as mercury, PCBs, and even radionuclides that can freely flow into fish farms. In fact, farmed fish has been documented to accumulate higher concentrations of some contaminants than wild fish. Concentrated fish feces, uneaten food, and other inputs also pollute the water that flows out of fish farms, altering marine habitats and changing the feeding behavior, physiology, and health of wild fish. This environmental degradation runs counter to the organic law.

Second, farmed fish routinely escape from open-ocean facilities in large numbers—over 24 million have been reported in just two decades. They carry pathogens and diseases to the ocean and rivers, restructure food webs through the introduction of non-native species competing for resources, and can lead to the extinction of wild fish of the same species in certain areas. These disruptions in marine ecosystems violate some of the basic tenets of organic, which include promoting ecological balance and conserving biodiversity.

Third, farming migratory fish can never be organic because their confinement would curtail their biological need to swim far distances. Salmon, for example, are hatched in freshwater and spend their adult lives at sea before returning to their birth rivers to spawn and die—a journey that takes years and covers thousands of miles. Inhibiting a fish’s natural, instinctual behavior goes against the principles of organic, which demand that organic farmers serve as stewards of animal welfare. Yet, surprisingly, the U.S. Department of Agriculture (USDA) has not ruled out this practice of allowing producers to farm migratory fish in captivity.

Finally, if the new regulations proceed as anticipated, they would allow producers to use wild-caught fish and their by-products—fishmeal and fish oil—in feed. This flies in the face of organic’s foundational requirement that all animals are fed a 100 percent organic diet. What’s worse is that feeding farmed fish wild-caught fish and by-products would increase pressure on already over-exploited and recovering fisheries, decreasing the food supply of a wide range of native species. This is clearly inconsistent with organic methods of production.

Center for Food Safety’s Report demonstrates the impossibility of rectifying these critical problems and it makes a compelling case for the USDA to withdraw its plans to allow certified organic ocean-based fish farming. To do less, would be irresponsible organic policy-making. Permitting “organic” fish farming at sea would put the entire U.S. organic industry in jeopardy by weakening the integrity of the USDA organic label. This would be an extreme insult to organic producers and consumers across America.

As organic policy director with the national public interest organization Center for Food Safety, Lisa J. Bunin’s work focuses on curbing the proliferation of harmful food-production technologies by promoting organic and sustainable agriculture and by challenging policies and practices that compromise organic integrity.