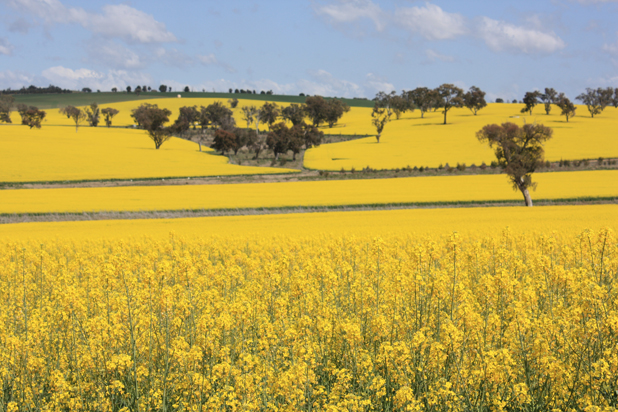 A lost court case points in favor of GMO production

Australian organic farmers united under the Organic Federation of Australia OFA are all gravely worried about the lost court case against Steve Marsh. Steve took his neighbor farmer Michael Baxter a GM canola grower to court over contamination (of pollen) of the GM crop onto his organic non-GM canola crop. The organic non GM canola was (partially) fertilized by GM pollen which came through wind drift onto Steve’s plants. The harvested result contained GM seeds and was decertified as organic, causing a financial loss for Steve Marsh. This ruling has far reaching consequences for the organic industry according to the OFA.

Organic farming in Australia now has no legal protections in place for farmers whose crops are contaminated with GM seeds. This puts many farmers at risk whose properties border farms growing GM crops.

Albeit this being contrary to laws already in place which protect farmers from contaminating sprays from neighboring farms. These ‘chemical trespassing’ or ‘spray drift’ laws are designed to protect farmers from pesticides, herbicides or fertilisers from adjacent properties. In the same way that sprays are a contaminant, from the perspective of an organic grower, GM seeds are also a contaminant. They compromise the integrity of the farm and disrupt the important ecological balance which forms the foundation of an organic system. The court ruling did not recognize this critical point.

Farmers can easily lose their organic status from GM contamination from neighboring properties due to this ruling. The OFA predicts that the economic costs for the industry could be catastrophic. For every farmer who loses his organic certification, the lost business will be crippling.

This loss not only hurts the farmer but it also impacts on the overall national economy. Organic farming has consistently proven to be a valuable economic and environmental resource for Australia, growing at 12 percent per year and now with a value of $655 million.

Countries around world, including several Asian countries and most of the European Union, Saudi Arabia, Egypt, Brazil, New Zealand and several states in the USA and have a complete ban on the importation of certain GM produce. This means farmers who grow GM are limited to export countries that allow GM produce and organic farmers could lose valuable markets if their land is contaminated.

The consistent increase in organic food production has been mostly driven by community demand. Food is perceived to be more nutritious and tastier when grown using ecologically sustainable methods.

Compared to conventional farming, organic produce is a higher value commodity and the supply chains for organic produce are not as widely dominated by a select group of multinational corporations. This means farmers get a higher return and are in greater control of their distribution channels.

As a country, why would we not want to protect such a valuable resource?

Conventional farming is also deceptively expensive: most of the farming systems are based on high inputs of expensive fuel, fertilizer, chemicals, and machinery. Economies of scale make these production methods efficient but not necessarily more so than organics if this method were given the same subsidies and support as conventional monoculture farming.

Steve Marsh not only lost his organic status and his business, but his case now leaves other organic farmers completely vulnerable.

Look to the United States where over 70 percent of food consumed is sourced from GM crops.

Monsanto, the very company who provided the seeds grown by Michael Baxter, has a litigious long history of suing farmers who are found to have GM crops growing on their land due to contamination of neighbouring GM Monsanto crops.

In fact, it was reported recently that a third of U.S. organic farmers have experienced problems in their fields as a result of nearby use of genetically modified crops.  Over half of those growers have had loads of grain rejected because of unwitting GMO contamination.

This worrying trend should be a wake-up call to Australian regulators should they continue to avoid protecting non GMO growers and organic farmers from GM contamination.

Farmers deserve protection and if they are not legally protected, it compromises a valuable industry, and the livelihoods that go with it, according to OFA.