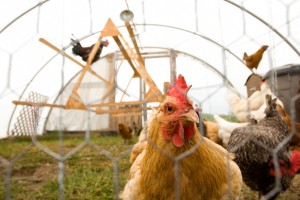 Organic eggs give a boost to the French egg market globally in trouble. According to CNPO (Centre National de la Promotion de l’Oeuf), sales of organic eggs in supermarkets and hypermarkets showed a revenue growth of 8.7 % in 2013, against an increase in all grades combined of only 2%. “This is a huge market, they now represent 10% of sales in supermarkets, we cannot ignore,” admits Ludovic Duriez , CNPO administrator.

At the same time the industrial produced eggs, ie those laid in cages, saw sales decline by 0.3%. These represent 62% of market share against 38% in the GMS quality eggs (red, outdoor and organic label). As a reminder, organic eggs are recognizable thanks to code 0, which appears on the packaging after the initial “fr” for laid in France. Those with code 1 are laid by hens raised outdoors, those with code 2 from hens inside buildings and those with code 3 by hen in cages.

A volume of 40% of 14 billion eggs produced in France last year, against 12 billion in 2012, were sold in supermarkets, a third of the industry sold directly at farmer markets, health shops etc … “the value of the egg market reached 13 billion euros in 2013, an increase of 0.6%,”says Christian Marinov, Director of CFA (French Confederation of Poultry).

“This product increasingly recommended by nutritionists, remains the least expensive for the daily intake of protein, around 11 to 18 cents each,” says Philippe Juven, producer and president of CNPO. However, the industry does not look at the future with confidence.” An imbalance between supply and demand shows on the horizon following the global renewal of laying houses and the ensuing production potential,” says Christian Marinov . […] The head of the CFA fears a new “egg crisis” this summer.