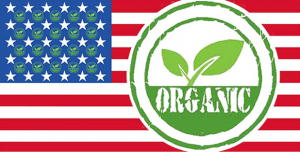 Organic Connections recently published a new analysis of trends in the American organic sector.  The study on which it was based was jointly carried out by the Organic Trade Organization (OTA), the Center for Food Safety (CFS) and the BioNutrient Food Association (BNFA).

Organic food sales grew by more than 10 percent in 2013, repeating the pattern of 2012. The total USA organic food market is worth around $33 billion per annum. OTA’s yearly attitudes and belief survey has noted that more than 80 percent of families with children in the USA are occasional purchasers of organic products, a proportion that has been steadily increasing over the past four years.

Dan Kittredge, (President of BNFA) notes that awareness of food and health related issues around food is increasing in the USA. During the past 3 generations the consumption of processed conventional foods has created more susceptibility to disease, which has its roots in low food quality.  He says that our genetic information is waking up and moving our thinking towards the desire for healthier food.

Taking away the need to use agro-chemicals would also remove the financial and lobbying power that is being used to entice political decision makers to condone the Farm Bill.

According to Laura Batch, Executive Vice-President of OTA, there is a tremendous increase in interest in organic produce, particularly among young people. Farmer’s markets are becoming increasingly popular. There is also a growing interest in locally and naturally (without agro-chemicals) produced food.

The GMO issue is an increasing problem for natural and organic farming communities across the country (and elsewhere in north America), due GMO crops pollinating and polluting non-GMO crops. The Center for Food Safety is demanding a moratorium on the approval of all new GMO food crops to prevent further contamination. According to Dan Kittredge, Monsanto will ultimately lose this battle since consumers will go for high quality. GMO crops are low in quality and fetch lower prices.

Laura Batcha from the OTA says that the future of US organic agriculture looks very promising and that export markets have opened up since the Obama administration came to office.

The current US Secretary of Agriculture, Tom Vilsack, has said that he wants to see a further 20% in organic operations during the remainder of his tenure. But as Lisa Bunin (Policy Director of the CFS) points out, Mr Vilsack should take this goal to Congress and push for more program support and research in organic methods. Also more funds should be available to support the conversion of farms and to facilitate low cost loans for new organic farmers. Land in the US must be preserved for agriculture and particularly organic agriculture.

Dr. Don Huber, Professor Emeritus of Plant Pathology at Purdue University is quoted by Dan Kittredge: “We’re going to look back in five years and not even recognize where we were companies like Dole and major multinationals have seen enough data and they understand that they will make more money growing healthier plants; they’ll have higher productivity and lower production cost. The alternatives to Monsanto are exploding right now in consultants, agronomy and suppliers. I think in five years the amount of transition that will have occurred is going to be dramatic, and we’re really at the cusp of that which we want to see”.