A two hectares Model Organic Farm (MOF) plot was established in 2008, as part of the research farm at the Central Arid Zone Research Institute (CAZRI), Jodhpur. The plot was certified as organic in 2011. 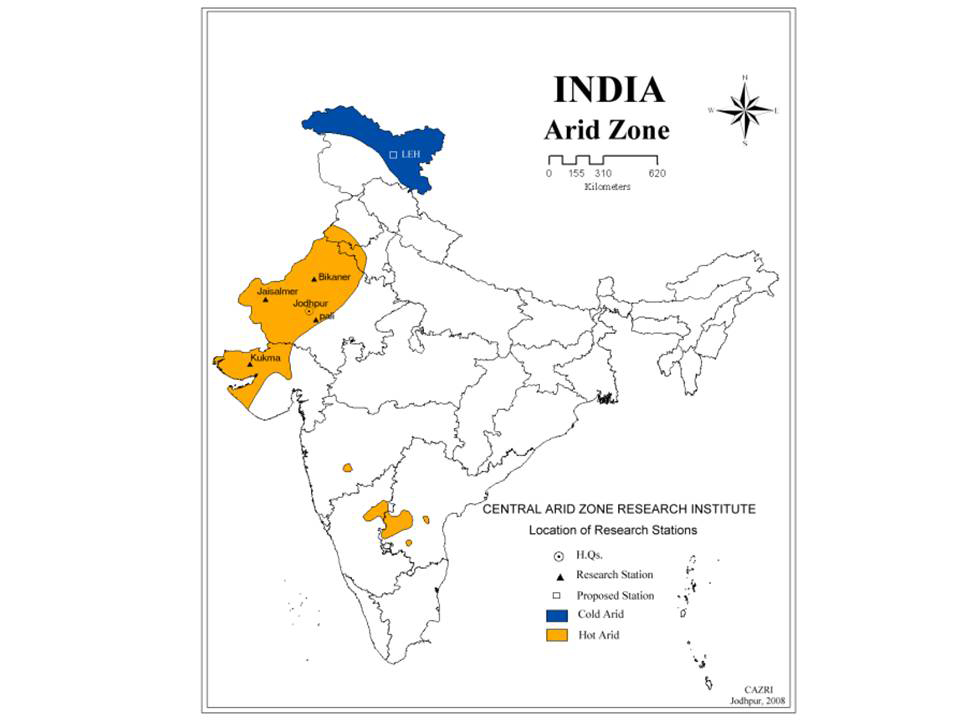 India’s low rainfall areas (which receive less than 500 mm/yr of rain) cover about 45 million ha (approximately the size of Sweden). They are mostly found in Rajasthan (12 districts) and small parts of Gujarat, Andhra Pradesh, Haryana and Tamil Nadu. The low rainfall is erratically distributed and there are frequent droughts – which can cause economic uncertainties for local farmers. This condition is being further aggravated by climate change. It is expected that the impact of climate change by the end of the 21st Century will be greater in India’s low rainfall areas than in the country’s semi-arid or sub-humid regions.

Traditionally farms in these low rainfall areas are mixed, combining annual and perennial crops with livestock rearing. This (by default) ‘organic’ system is based on returning crop residues and manure to the soil. Although this is a sustainable farming system under the existing climatic uncertainties, its productivity is generally low, due to inefficient use of local resources, such as crop residues, improper handling of manure and a lack of knowledge of organic farming.

Under these extreme conditions the use of synthetic inputs such as fertilizers and pesticides is risky and uneconomic and the use of these chemicals is limited to pockets of irrigated areas. In view of the high cost of chemical fertilizers and uncertain yields in this climate, several researchers have suggested increasing the use of manure arguing that providing balanced nutrition to plants through organic sources could be the most feasible option for mitigating the effect of climatic uncertainty.

These low and erratic rainfall areas of northwest India are also characterized by extreme temperatures and light soils. The traditional farming systems are based on recycling crop residues to increase the humus content of these light soils. There are several other advantages of using and promoting this system in low rainfall areas. 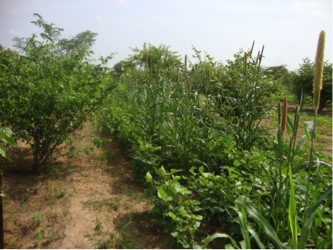 These factors all suggest that there are good opportunities to promote organic farming in India’s arid zones. To this end CAZRI has been carrying out on-farm research to improve the productivity of existing farming systems, making use of modern agricultural and ecological technologies and knowhow.

There are good opportunities to promote organic farming in India’s arid zones. To this end CAZRI has been carrying out on-farm research to improve the productivity of existing farming systems, making use of modern agricultural and ecological technologies and knowhow.

The availability of organic inputs in low rainfall areas

There is limited availability of organic inputs, such as crop residues and animal manure in low rainfall areas as biomass production is generally low. To learn more about how to enhance the quantity and quality of these inputs, a survey was done in four districts (Jodhpur, Nagaur, Pali and Barmer) during 2006-2008. A questionnaire was developed to get primary information from selected blocks. Secondary data was collected to get information at village and district level.

The survey generated the following insights:

The availability of these resources at farm level is influenced by several factors:

In general most farmers use pure cow dung, usually left out in open sunlight for months, causing huge nutrient losses, especially of nitrogen. On average 1.5-4.5 metric tonnes/ha of organic material is available at the farm in the form of crop residues and animal dung.

Resource availability is further increased where there is intensive dairy farming (mostly in semi-urban areas). When added together all the organic inputs from available sources provide between 4.5 to 5 metric tonnes/ha. This is sufficient for sustainable rain-fed farming in these areas.

Together these organic inputs are available in sufficient quantities in low rainfall areas.

About the author: Arun K Sharma is a Senior Scientist at the Central Arid Zone Research Institute CAZRI and has been working on eco-friendly farming systems for low rainfall areas since 1992. E mail: arun.k_sharma@yahoo.co.in / aksharma@cazri.res.in .