Showcase for low rainfall areas in India     By Arun K. Sharma Part 2 of 3

People or organisations present their profiles and work through the social media, and those who like them can then follow them. The same is true for organic farming, if all the possibilities are displayed and the outcomes can be seen, a famer just needs to ‘like’ it and prepare himself to ‘follow’ (adopt) it. In this second phase the farmer will need technical and to some extent, financial support.

CAZRI has developed a 2-hectare model organic farm (MOF) to show farmers organic farming technologies, how they can be integrated and their synergetic effects. This is the like phase. If a farmer decides to follow (adopt) this approach then CAZRI provides the knowledge and, to some extent, financial support (from various national schemes on agriculture, described below) so the system can be replicated successfully on the farmer’s fields. We have developed the following support facilities to research and demonstrate the organic system. 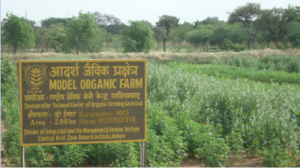 Boundary plantation of senna             A biodiverse system with crops and trees 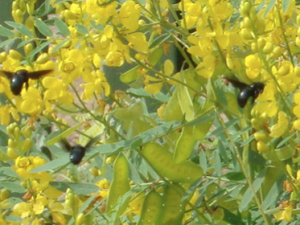 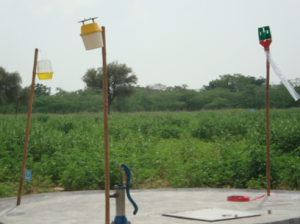 For scientific purposes records are maintained about input use, farming practices, produce storage and auditors from the Rajasthan Organic Certification Agency (an accredited certification body based in Jaipur) visited several times to verify the records and testing of pesticide residues in the soil and produce. The model organic farm was certified organic in August 2011 after completing a 3 year conversion period.

THE OUTCOMES OF THE MOF’s EXPERIMENT

A rotation of four high-value crops, including cluster bean (Guar) and sesame (Til) in the rainy season and cumin (Zeera) and psyllium (Isabgol) in winter was selected for the study. Five years after establishing the farm there has been an overall improvement in soil health and agro-diversity that is helping to make the system more resilient to climatic extremes such as drought, long dry spells or heavy rains. The population of beneficial fauna has also increased and is controlling pest incidence. More details are given below.

The use of cattle manure has led to an observable increase in soil water retention (from 8.43% to 8.92%) that has helped in better growth and crop yields. Similarly an increase in soil organic carbon content from 0.23% to 0.31% has been observed after five years of applying compost at a rate of 5 metric tonnes/ha/year. Biological activity, measured in terms of Dehydrogenase enzyme activity, has also improved from 1.06 to 2.36 (p Kat g-1), showing that the soil is becoming more alive.

Crop resilience to climatic variability has been enhanced by the use of organic manure. This is observed in sustained crop growth, less incidence of pests and diseases and sustained yield during climatic extremes, compared to conventional farms where crops almost always fail in such situations. Yields increased significantly with an increase in the dose of organic manures (from 2.5 to 5 tons/ha) for all the crops. Legume cultivation in the kharif (dry) season contributed an average 25-30% increase in yield in the subsequent crops of cumin and psyllium.

There is a widely held view that organic systems give poor yields. However, the findings at the MOF show that, while during the initial developmental stage of an organic system there may be slightly lower yield than in a conventional one, after 2-3 years once the system is developed the yield levels are comparable to the conventional (chemical input based) system. In the fifth year (2013) yields of 917.5kg/ha for sesame, 1122.2 kg/ha for cluster bean, 830.9 kg/ha for cumin and 856.4 kg/ha for psyllium were recorded. This is comparable to the average yield of a conventional system. Since most of the inputs are being prepared on-farm the cost of production was reduced by 30-70%, depending upon the crop.

Increasing the density and diversity of farmer’s friends (beneficial insects)

Round year availability of water and nectar and no use of chemicals led to an increase in the diversity and density of beneficial fauna, which has almost tripled in five years (2008-13). Syrphid flies, wasps of different types, honey bees and geocorid bugs are major beneficial insects for Zizyphus. The henna crop attracts Chrysoperla, Apis sp., syrphid flies and Coccinellid beetles (Ladybird beetle). Major beneficial insects on pearl millet, cluster bean and weeds include Digera muricata (Lolru), Amaranthus virdis (Cholai), Chrysoperla and ladybird beetle Chilomenes sp.

Next week the last part:

About the author: Arun K Sharma is a Senior Scientist at the Central Arid Zone Research Institute CAZRI and has been working on eco-friendly farming systems for low rainfall areas since 1992. E mail: arun.k_sharma@yahoo.co.in / aksharma@cazri.res.in .