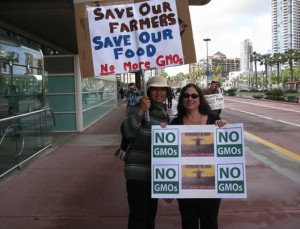 Despite its own admission that it will cause an up to sevenfold increase in chemical pesticide use, the United States Department of Agriculture (USDA) is poised to approve a new type of genetically engineered seed built to resist one of the most toxic weedkillers on the market, a huge setback for organic farming.

Now, total approval hinges on the Environmental Protection Agency. If that federal body approves the new GMO, farmers will be free to plant corn and soy seeds genetically manipulated to live through sprayings of Dow’s Enlist Duo herbicide, a chemical cocktail containing both glyphosate and the antiquated, toxic chemical 2,4-D. Ironically, in the 1990s, chemical companies said the development of GMOs would eliminate the need to use older, more dangerous chemicals like 2,4-D. But as GMO use ramped up over the last few decades, chemical use increased, and many weeds are no longer responding to glyphosate, the main ingredient in Roundup and the current chemical of choice for GMO farmers. This has created a “superweed” crisis, resulting in millions of acres of U.S. fields’ being infested with hard-to-kill weeds.

With this week’s USDA final Environmental Impact Statement (EIS) suggesting approval of the new GMO is eminent, many food and public-safety experts say the American public faces unprecedented risks as a result of the decision. After all, current chemical use is so high that foods now actually contain “extreme” levels of glyphosate. Because it’s a systemic weedkiller, it actually winds up inside of food. Adding 2,4-D to the mix is even more concerning, given its ties to cancer.

“USDA’s announcement is an outrageous abdication of USDA’s responsibility to protect our health and our food supply. The Obama Administration has ignored the interests and demands of millions of Americans, members of Congress, and scientists, farmers, and health professionals,” says Andrew Kimbrell, executive director of Center for Food Safety.

Farmers are upset about the decision, too. “Weed resistance is a major problem for farmers, and we need a solution. This decision shows that the only options USDA is willing to consider are ones that lead to increased profits for chemical companies. We need to get off the pesticide treadmill, not increase the speed,” says George Naylor, a Center for Food Safety board member and an Iowa corn and soybean farmer.

The approval comes despite USDA’s acknowledgment that Dow’s crops will trigger a three- to sevenfold increase in agricultural use of 2,4-D, foster 2,4-D resistance in weeds, and inhibit farmers’ use of nonchemical weed-control methods. “USDA’s decision represents a huge setback for farmers and sustainable agriculture. Independent scientists have linked 2,4-D to cancer, Parkinson’s disease, and other maladies,” says Bill Freese, science policy analyst at Center for Food Safety. “Introduction of 2,4-D-resistant corn and soybeans will dramatically increase use of this toxic herbicide, leading to more disease, environmental harm, and increasingly intractable weeds for farmers.”

The adoption of this new generation of GMOs also threatens farmer’s market favorites like tomatoes, peppers, grapes (and wine!), and potaotes. An 2,4-D drift could cause these crops to become mangled and deformed, or even outright kill them.

For more reasons to reject GMOs, check out the biggest GMO myths, busted.