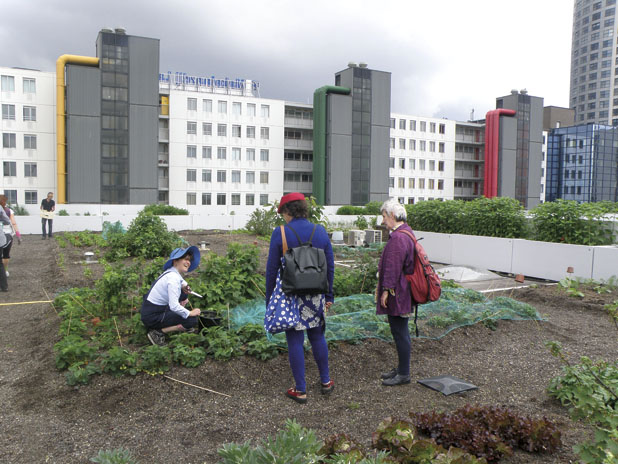 Europe’s first rooftop-market garden has been built in Rotterdam. The Dakakker (Roof-field) is breaking even and should show a small profit in the coming years. Construction was made possible by winning a design contest. While the garden is organically managed, the produce cannot be sold as organic (as it is not grown in ‘the soil’). There is no shortage of interest in the project, both at home and from abroad.

“In the building where we were before, we had already investigated the possibility of doing something green on the roof,” says Wouter Bauman of the Environment Centre Rotterdam (ECR). “Then in 2011 we moved to Schieblock and discovered that a co-tenant, the architect group Zus (Sister in Dutch), had the same idea.” Zus took part in a competition under the Architecture Biennale. “And then it was bingo,” says Bauman, “Zus won the first prize of more than 4 million Euros. With that money Dakakker could actually set up the first rooftop market garden in Europe.”

“The garden was built by Binder Groen Projects. The system used for rooftop gardening was developed by OPTIGROEN, a Dutch offshoot of Optigrün International AG, an international franchise which originated in Germany 40 years ago. In the Netherlands, Optigroen installs about 200,000 m2 of green roofs or rooftop gardens each year, making a considerable contribution to the growth of the global total, currently about 2 million m2. The most common are green or ‘sedum’ roofs, but Optigroen also provides park roofs where shrubs and even trees can grow. Green roofs have the advantage of providing a cooling effect, and they protect the underlying roofing, making it last twice as long. In addition green roofs contribute to maintaining biodiversity and regulating the runoff of rainwater. The payback period of a green roof is approximately 8 years. 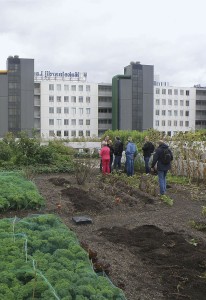 Optigroen was involved in the Brooklyn Grange initiative, the first rooftop market garden in New York. “We cooperated on the development and construction of a roof system for a commercial rooftop garden for growing vegetables,” says Henk Vlijm, managing director at Optigroen. “The Brooklyn Grange Farmers now manage three major rooftop market gardens, where they grow organic fruits and vegetables for local restaurants and consumers.”

Based on the experience in New York, Optigroen has developed the rooftop market garden system. This consists of five different layers, which regulate the drainage of rainwater and prevent the plant roots from penetrating into the underlying roof structure. The top layer of the substrate is the thickest and consists of a mixture of lavabims (a lightweight, frost resistant, porous and permeable lava), slate, sand and clay and compost. “The product is formulated so as to make it excellent for sowing and for plants to root well,” said Vlijm.

Optigroen investigated whether it is possible to get organic certification for the rooftop market garden system or the rooftop gardens in Europe. “In practice, we work organically, also the substrate is made of natural materials, unfortunately organic certification is not possible because we do not meet the European requirement that organic produce be grown in regular soil. Substrate cultivation, however natural, is not permitted.” By contrast in America the first rooftop market garden (Uncommon Ground in Chicago) was certified organic in 2008, and there are now dozens of organic rooftop market gardens in the US. Natural food retailer Whole Foods is about to open a new store in Brooklyn (New York City) with a greenhouse of nearly 2,000 m2 on the roof. It is planned that the greenhouse will supply a large proportion of the organic vegetables sold in the store. This will maximise freshness and minimise the ecological footprint. It is hoped that the new revisions to the EU organic regulations, currently being discussed in Brussels, will offer similar opportunities for expanding organic rooftop gardening in the EU.

The Dakakker in Rotterdam has helped spark interest in rooftop market gardens in the Netherlands and neighbouring countries. Vlijm continues, “We are currently working on developing a rooftop market garden of 5,000 m2 in Brussels and several smaller gardens in Germany, including a berry growing rooftop where fresh jam will be made. In the Netherlands, we are in discussions with several parties including a restaurant chain. These parties want to be able to tell their clients that the fresh herbs are picked from the roof. This can set them apart from their competition.” Despite the growth, Vlijm predicts that rooftop market gardening will remain a niche activity. “Because of the weight, only a limited number of roofs are suitable. It is mainly about influencing mind-sets.” There is so much interest in the rooftop garden in Rotterdam that organising group tours has become a commercial activity. “Next week, a group from Denmark will visit who want to start a rooftop garden in Copenhagen,” says Bauman, who manages the ECR garden. “Last year there was even a group from Vietnam.” With bookings from 30 groups, the 2014 programme is already fully booked. 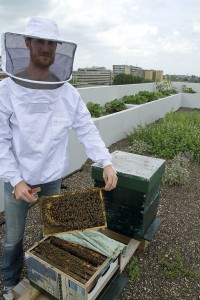 Bauman spends approximately 8 hours per week on the Dakakker. He is supported by a group of about 15 volunteers. “Every Friday morning we go to the roof to harvest and to prepare orders and to tend the garden,” says Bauman. “In the days before, I send out a list of available produce to chefs at five restaurants in the neighbourhood so they can make their orders and these are also delivered by volunteers. The rest of the vegetables we sell on Friday in a shop here in the building, to people who work here and local residents.

Other activities that help the operation cover its costs include the rental of the glass roof pavilion as a meeting room and a popular education program for children. This program, whose name ‘Dakennie?’ (‘Can’t do?’) comes from Rotterdam slang, includes a range of activities such as making seed bombs which the children can drop on their way home from school, a form of guerrilla gardening.

Bauman is thinking of other new activities, such as renting out the roof as a location for photo and film shoots and yoga classes. When asked what the most commercially interesting horticultural products are Bauman says without hesitation: “Edible flowers. You don’t have to do much and a bowl of flowers, for example, brings in 5 Euros. It is a product that must be super fresh and so you can’t easily transport it in from out of town. The flowers wither quickly. The most popular flowers are nasturtium, marigold, rucula and courgette. Among the herbs, lemon verbena and the seven different varieties of mint are most popular.

With all these activities, this green enterprise is presently self-sustaining, but Bauman thinks it is also possible to make a small profit. “I hope we can find an entrepreneur in the future who would operate the gardens, for example in conjunction with a restaurant.” The seeds of sustainability can be sown anywhere: even on an old roof in the middle of the big city.

Sustainable Green Rooftop Optigroen is currently working on a whole new application of its green roofs aimed specifically at farms. Next year the company will be launching a “grass” roof and a ‘normal’ green roof. The grass roof is especially designed to integrate large stables in the landscape. Both type of roofs have insulating properties helping reduce heat stress to the animals during hot periods by the cooling effect. The pasture can also absorb and recycle stable and rinse water, which would otherwise go the slurry pit and will have to be carted away. Solar panels can also be integrated in the green roof system.

Bernard Faber is author and photographer, specializing in architecture, sustainability and organic agriculture and food business. Based in Alkmaar, the Netherlands.