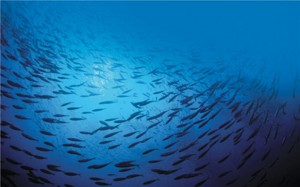 A growing section of the world population (1.3 billion) depend on fisheries and aquaculture for food and as a source of income, but harmful practices threaten the sector’s sustainability, says a new FAO report published today. The report also notes that illegal, unreported and unregulated (IUU) fishing remains a major threat to marine ecosystems and also impacts negatively on livelihoods, local economies and food supplies. According to the latest edition of “The State of World Fisheries and Aquaculture“, global fisheries and aquaculture production totalled 158 million metric tonnes in 2012, around 10 million tonnes more than in 2010. Aquaculture provided a record 66.6 million metric tonnes of fish. Fish now accounts for almost 17 percent of the global population’s intake of protein – in some coastal and island countries it can top 70 percent. “The health of our planet as well as our own health and future food security all hinge on how we treat the blue world,” FAO Director-General José Graziano da Silva said. However, the report warns that to continue to grow sustainably, aquaculture needs to become less dependent on wild fish for feeds and introduce greater diversity in farmed culture species and practices. For example, small-sized species can be an excellent source of essential minerals when consumed whole. However, consumer preferences and other factors have seen a switch towards larger farmed species whose bones and heads are often discarded.

An estimated 1.3 billion tonnes of food are lost per year — to about one-third of all food produced. This figure includes post-harvest fish losses, which tend to be greater in small-scale fisheries.

Per capita fish consumption has soared from 10 kg in the 1960s to more than 19 kg in 2012. FAO estimates that 10–12 percent of the world’s population depend on fisheries and aquaculture for their livelihoods. Some 90 percent of fishers are small scale and it is estimated that, overall, 15 percent are women.

*The role of fish is set to feature prominently at the Second International Conference on Nutrition jointly organized by FAO and the World Health Organization (WHO) for 19–21 November 2014 in Rome.