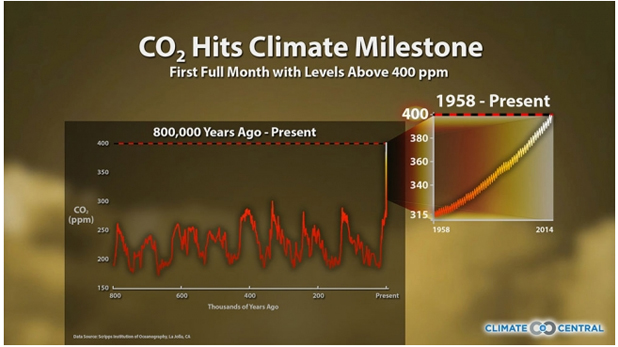 April fell first. It lasted through May. Now June will be the third month in a row with average carbon dioxide (CO2) levels above 400 parts per million.

Atmospheric concentrations of the greenhouse gas, which helps drive global warming, haven’t been this high in somewhere between 800,000 and 15 million years.

And while the 400 ppm mark is somewhat symbolic (as the increase in warming between 399 ppm and 400 ppm is small), it serves to show how much carbon dioxide has been put into the atmosphere since preindustrial times, when concentrations were around 280 ppm. The increase in this and other greenhouse gases in the atmosphere has warmed Earth’s average temperature by 1.6°F since the beginning of the 20th century. World leaders agreed at a UN summit in 2009 to limit warming to 3.6°F, but prominent climate scientists like James Hansen have said that amount of warming will still be too much.

While other scientists differ on pinpointing particular numbers and limits, many who study climate change agree that some kind of action is needed.

“It is urgent that we find a way to transition to non-carbon fuels as our source of primary energy,” said Pieter Tans, a climate scientist with the National Oceanic and Atmospheric Administration.

The world first passed the 400 ppm milestone on May 9, 2013. The first 400 ppm measurement of 2014 came two months earlier. CO2 concentrations at the Mauna Loa observatory in Hawaii, which have been monitored since 1958, have been steadily above that level since the beginning of April, which marked the first full month with an average CO2 level above 400 ppm.

While concentrations of CO2 have begun their seasonal decline from their May peak (which was just shy of 402 ppm), the daily averages have stayed consistently above 400 ppm. With the month almost at an end, June’s average will be above 400 ppm. 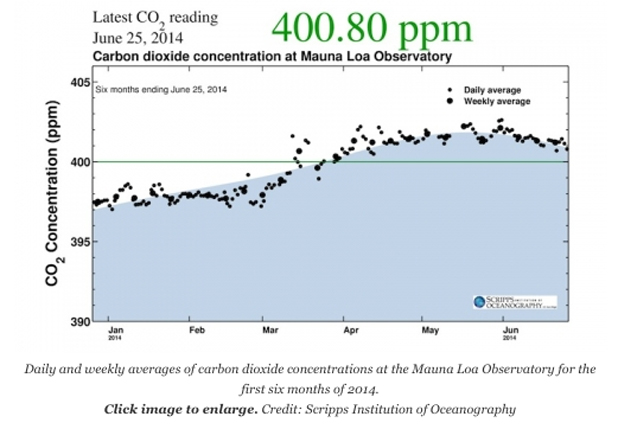 That means it will be the first time in recorded history with this many weeks in a row of such high atmospheric concentrations of CO2.

“It still feels a bit surreal now to be reporting concentrations over 400 ppm,” Ralph Keeling, who runs the monitoring program at Mauna Loa, told Climate Central after the April milestone. “Even though it was pretty much inevitable that we would get to this point, it still takes some getting used to.” (Keeling’s father, Charles, began the monitoring effort, and the graph showing the rise of CO2 over time is known as the Keeling Curve.)

Given the typical rate of decrease in concentrations, which happens as vegetation in the Northern Hemisphere sucks up CO2, they may only dip consistently below 400 ppm come the third week of July, Tans said.

The levels of CO2 in the atmosphere vary not only through humanity’s addition of the gas through industrial processes, but also with the biological cycle. Concentrations begin their rise in the winter, when plants are dormant, and continue rising through spring. They reach their peak in May and then begin to decline because plants are in full bloom and are pulling CO2 from the atmosphere to fuel photosynthesis.

But plants only pull so much CO2 out of the atmosphere in a given growing season. Each year they leave a growing excess of about 2 ppm behind, which is why the 400 ppm mark came earlier this year than last and will come earlier still next year.

Tans expects the first 400 ppm measurement of 2015 to happen in February, and for concentrations to stay above that mark through July — a full six months. In just another year or so of CO2 building in the atmosphere, the world will be above 400 ppm year-round.

“As long as human society continues to emit CO2 from burning fossil fuels, CO2 in the atmosphere and oceans will continue to increase,” Tans said.