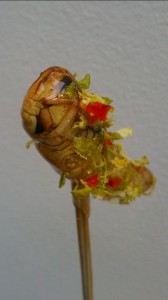 In the Netherlands a new initiative has recently been started to promote eating insects: The Grasshopper Suppliers. Three young entrepreneurs from Amsterdam are seeking to convince the population of the Netherlands to eat more insects and to provide these at affordable prices. Eating insects is better for the environment, and for humanity.

Producing one kilogram of edible beef requires around five kilos of feed and 15,000 litres of water. But a kilo of locusts, requires little more than a kilo of feed, and no water (as locusts extract water from the grass they eat). The production of beef also requires, on average, twelve times more land than locust production. Producing locust-protein is much more efficient than other forms of animal protein and can cost 1/10th as much.

Efficiency also has an effect on carbon footprints: insect protein emits only 1/12th of the greenhouse gases produced by beef. In a world with growing shortages of food, water and agricultural land and where global warming is becoming more of a problem, insects offer a form of protein that can help humanity to enjoy a resilient future.

The Grasshopper Suppliers believe that things have to be done differently and have decided to take the lead. Their research shows that there are two main reasons why people in the Netherlands do not eat insects: many people find the idea off-putting and; insects are outrageously expensive – some online shops sell grasshoppers at around €350 per kilo. 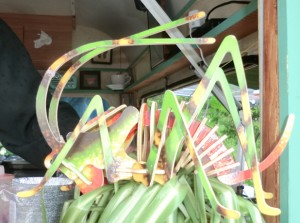 At the moment The Grasshopper Suppliers are importing locusts from companies in other EU countries and Canada. These companies breed insects on a substantial scale, allowing The Grasshopper Suppliers to sell insects at about one third of the current price. They are starting with locusts, as market research shows that people have the least difficulty in eating these and they are easy to prepare. If the grasshoppers catch on, other species will be introduced. They are also launching a campaign to explain to people the benefits of eating insects, and to get as many people as possible to taste the grasshoppers/ locusts – once people have eaten an insect, they often realise that there is nothing wrong with it. In this way, the psychological barrier that many people experience will slowly be broken down.

We will all eat insects soon? 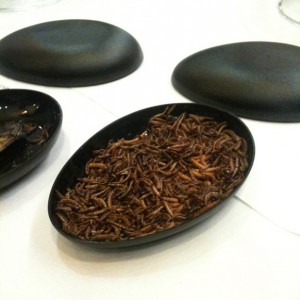 The question is whether eating insects will take off in the Netherlands. The founders are hopeful: “in the 19th century, shrimp and lobster were considered unsuitable food for people. Now lobster is a delicacy. That shows that our food habits can change.” The company itself is still being formed and a crowdfunding campaign is in full swing. The first goal – € 500 for start-up costs – was achieved in the first 24 hours, encouraging The Grasshopper Suppliers to continue. In the coming month they hope to collect enough money to start a campaign to encourage individuals to go to restaurants and try insects – many chefs have already shown an interest in having them on the menu.